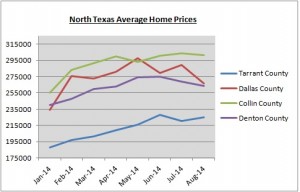 Since the start in 2014, real estate in North Texas, as most know, has been a hot commodity.  However, the end of summer is quickly approaching which would perhaps suggest a slowdown in the market, but is the market slowing down in North Texas?  To answer that, we turn to data provided by our MLS system here in North Texas (NETRIS) and take a look at the trends of the four major counties in North Texas; Dallas, Denton, Collin, & Tarrant.  This information has not been filter by any particular category and includes all property type, year built, square footage, construction type, and price range. 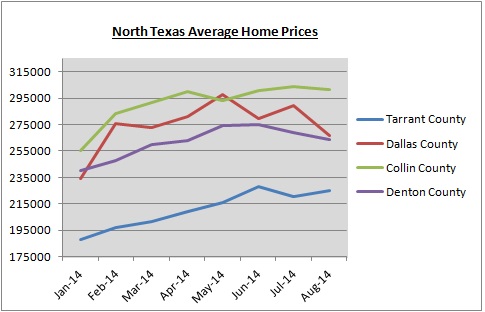 The trends around North Texas would indicate that the real estate market could be slowing down just a bit.  However, I believe the North Texas market is still a very strong and active market with the average home prices still toward the higher end of what we have seen in the last few years.  Therefore, in my opinion the North Texas real estate market is still hot for the moment.  Keep in mind that real estate is cyclical and we have already entered into phase 2 of expansion from phase 1 of recovery.  Phase 2 occurs when all supply has been bought up or rented.  As more and more builders/homeowners catch up to this and add to supply through new construction and resale, we will enter the 3rd phase of hypersupply.  As demand dies down or other economic factors that effect and hurt demand, we will gradually fall into the 4th phase of recession.  Savvy real estate investors will wait for this phase to buy up properties at a discount, while homeowners looking to sell will cash in along the upward curve in phase 2 with little supply to compete with.